Let me tell you a story. It starts everyday when I get home from work. The long haired Maine Coon hybrid, his name is Nermal, is waiting for me, like a dog, at the top of the stairs. He’s so excited to see me. He’ll start crying and meowing as I’m locking up the door. He’ll cry and meow as I’m walking up the stairs. He’ll meow and reach up and put his front paws on my leg as I reach the landing. He wants me to pick him up, which is no little thing, considering he’s about 20 lbs of cat. So I’ll pick him up and carry him into the kitchen and I’ll rub his head as I’m doing it. He’ll push back against my hand and his motor will be running the whole time. His purrs are very loud.

This routine happens every day. From what the girlfriend tells me, Nermal will start meowing and crying when I leave the house. He’ll either go down the stairs and cry at the door, or he’ll sit on the landing and do it. Apparently he’ll do this for quite some time. My girlfriend has tried to shut him up, distract him, try to get him to come to her during my absence, all to no avail. I guess my cats are devoted to me.

Later in the evening, or during a lazy weekend at home, when ever my girlfriend or I try to sit on the couch with our laptops, the cats come along and want to be front and center. They will sit right on the laptop itself, right while you are typing whatever it is that you are typing. We can push them off and two minutes later, they are back. They will try to force themselves either on us, or in between us while we are relaxing in the living room.

The only “peace” we get from them is when we go to bed at night, and that’s only because the bedroom is a “cat free zone” because we shut the door at night. Even then, Nermal especially, will sit outside the door and do this guttural, weird, “meow howl.” He is going “feral” as I call it. I can open the door and tell him to shut up. That only encourages him. I can use a spray bottle filled with water and hose him down. I’ve done that many many times. All it has done is get him to move out of range. He’s a smart bastard.

What is the point of this story? I’ve realized that I have learned many lessons from my cats. The lesson I’m illustrating here is Persistence. My cats are nothing but persistent. They will have their way eventually. They are pretty patient about it too. Nothing deters them from getting what they want. They want to be on me? It WILL happen. Sooner or later, it will. What does this have to do with anything?

It is about EVERYTHING. Everything you do, you must be persistent. You want to get in better shape because you let yourself go? Persistence. You didn’t get fat overnight, you ain’t gonna lose it overnight either. You want to make more money? Again, persistence. You’re going to have to get up and get your ass out there. You’re going to have to hustle.

Want to start your own business? Persistence again. When you first come up with an idea, it’s awesome. You are full of piss and vinegar, ready to take on the world. You’ve done some research and found something that you would like to do, and so you do it. You build a website, you get your license to do whatever it is that you want to do. You get your tax I.D. You even find some product or service to sell, whatever that is and then…..

Nothing happens. No customers are banging down your door to buy whatever it is that you are offering. So you place some ads, you tweet your shit on twitter, you post on facebook a bunch of times, you take an ad out on Craigslist. And still nothing.

This is where persistence is key. You HAVE to keep going. Otherwise your business will fail before it had a chance, before it even got off the ground. This is the part you DON’T hear about on YouTube videos or on some course that you bought on the internet. This is where it becomes WORK.

Persistence is getting your ass out of bed every day to go to work. Especially when you don’t want to. Persistence is writing another e-mail, another blog post, making another phone call, crafting another tweet, posting another picture on IG. All when you are the only one that is reading them or looking at them. All when everybody doesn’t read that post, doesn’t answer that call, or hangs up on you.

Persistence is pushing ever forward even when you sometimes want to give up and watch Netflix.

Look at these two lovelies: 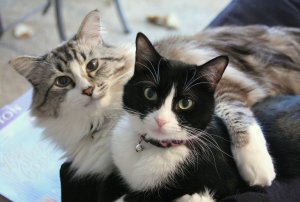 How can I say no to that?

As a final note, my cat’s both sleep with one eye open. There’s a lesson there too, but that’s for another day. 😉

Sharpen your Mind. Weaponize it. Start here and here. Sign up for my newsletter here.